D.Eclan Walsh begins his captivating new book about Pakistan with an account of how he abruptly and involuntarily left the country for the first time in May 2013. “The angels have come to drive me away,” he says in Urdu slang for the almighty men of Inter-Services Intelligence (ISI), whose presence in The Nine Lives of Pakistan is palpable, even when they are not seen.

The ISI thugs give Walsh no clue as to why he is being kicked out, and the government officials he questions only shrug. His quest to solve this riddle guides the book’s narrative as he retraces his nine years as a correspondent in Pakistan, first for the Guardian and then for the New York Times, in search of an answer. Solving the mystery emerging from the haze says a lot about the turbulent, fragile land that Walsh is trying to understand.

The book’s subtitle is “Programs from a Divided Nation”, and the author crosses these political, religious, ethnic and generational fault lines and, on his travels and in the lives of the nine convincing protagonists, compiles a portrait of the vast country of 120 million people.

Walsh is a wonderful writer with a talent for sketching a place, time and ambience in just a few short lines. He knows how to interweave a travelogue with an account of the relentless tensions that always threaten to break every vignette in the book. What also shines through is the pleasure with which Walsh throws himself into the most remote corners of Pakistan, into crowds, festivals and rites, with a drive that arises from a fascination for the country and its people.

He’s not a war correspondent. Most of the time, he is not looking for trouble, and it is hard not to envy him for all the parties and celebrations he is invited to. He looks for oversized characters and makes sure not only to interview them, but to linger by their shoulder to experience Pakistan through their eyes and ears. These are eight of the nine lives of the title. The ninth is Pakistan’s conflicted and complicated Founding Father Muhammad Ali Jinnah, a spectral presence. 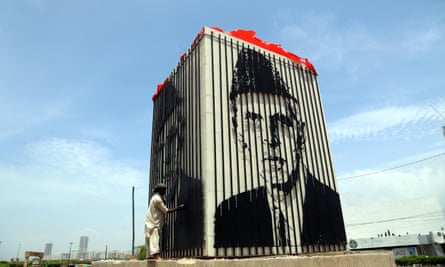 It says a lot about Pakistan’s bloody history that by the end of the book only one of the nine topics will be alive. Five of them encounter violent targets, either killed by jihadists or the security forces. “As you can see, this murder and combat business is very difficult,” says a courageous Pashtun politician, summing up local politics in the northwest. Walsh accompanied him from village to village on his election campaign and remarks dryly: “I have not seen a single woman. Guns, however, were everywhere. “

At the end of The Nine Lives of Pakistan, it seems almost incredible that the author himself survived the experience. The death rate among his subjects is only a measure of the dangers of Walsh’s work. With the rise of the indigenous Pakistani Taliban in 2006 and 2007, more areas are becoming unsafe and violence eventually rises in the capital, Islamabad. A courthouse, UN office and army checkpoint are bombed a few blocks from Walsh’s home.

Many extremist groups view Western journalists as legitimate targets, at least to kidnap them, and at some point Walsh is rescued by the man he rented a car from. When the landlord overheard a group of men discussing the logistics of the capture of Walsh, he packed the Irish journalist into the vehicle and sped away.

Islam or the army should be the glue that holds the place together. But both seemed to be tearing it apart. Declan Walsh

Pakistan’s link with extremism was not inevitable. After considering the issue, Jinnah recommended a secular republic from his deathbed. After the partition in 1947, Walsh explains, imams lost their influence in society and sank somewhere between a teacher and a tailor in the villages.
That changed when a pious general, Muhammad Zia-ul-Haq, took power in 1977, hanged the democratically elected Prime Minister Zulfikar Ali Bhutto and opened the door to a “tough, unyielding brand of Islam” imported from Saudi Arabia Prince and clergy Zia was allowed to sow madrassas on his land.

Then the Soviets invaded Afghanistan in late 1979 and Zias Pakistan was viewed by the West as a bastion against communism rather than becoming an international pariah. Jinnah’s dream of the “Land of the Pure” was sacrificed to the two animals of violent religious extremism and militarism. “Depending on who you asked, Islam or the army should be the glue that holds the place together,” Walsh writes. “But both seemed to be tearing it apart in their own way.”

At the end of Walsh’s time in Pakistan, the winner of this epic battle is clear: the ISI and the military machine behind it. “It seemed like a hard truth: the military always wins,” he notes as he prepares to leave, never to return. “When the ISI men come to the door, the illusion of a democratic state melts away.”

• The Nine Lives of Pakistan: Programs from a Divided Nation are published by Bloomsbury (£ 20). To order a copy, go to guardianbookshop.com. Shipping costs may apply.

Fast and Simple Information to the Finest Honeymoon Locations

Youngsters’s books roundup – the most effective new image books and…

Immigrant Children Are Being Expelled From The US With…