In real life, Bridges survived the tough first year of school and began a career as a travel agent that took her around the world. For the past 25 years she has worked with children across the country who carried a message of anti-racism and inclusion. So it was bittersweet that on November 10th, the day Bridges’ latest book, This Is Your Time, was due to be published, her mother died.

“This Is Your Time” is a message to children born from the pain Bridges felt after George Floyd’s murder, but also from the hope that so many young people would take to the streets in protests around the world.

Bridges speaks to The Atlanta Journal-Constitution about her past, as well as the hope she sees in the actions of today’s children.

This interview has been edited for clarity and length.

Q: Your mother was for you to integrate school, but your father was against it. Why so?

A: My dad was just against it because my dad fought in the Korean War. And he would always say that you could be in the same foxhole with a white soldier fighting for the same country, but you know if you lived at the end of the day you couldn’t go back to the same barracks together. They couldn’t eat together in the same mess. And he just thought, if that doesn’t change anything, fighting for the same country, next to another soldier and still not being treated as if it was your country, why send his child to this white school? That wouldn’t really change anything. And my father died before he saw the fruits of all our labors and sacrifices.

My mother was a little different. She wanted her children to have opportunities that she didn’t have. Education was really one of the things they weren’t allowed to participate in. They were partners. When it came time to bring in the harvest, schooling was secondary.

In 2006, Lucille Bridges posed next to Norman Rockwell’s original 1964 painting, “The Problem We All Live With,” showing her daughter Ruby at the Museum of Fine Arts in Houston. Steve Ueckert / Houston Chronicle via AP File

Q: Who gave your mother that drive, that feeling of struggle?

A: Probably my grandmother. My grandmother was a very determined person too – an entrepreneur in spirit. She was also a partner, but my grandmother when they left Mississippi and came to Louisiana and bought their own land, she grew and sold grain.

It was probably my grandmother who gave my mother this will and this determination. But I just think when my mom heard that it might give her kids an opportunity to get a better education and maybe even go to college, she just thought, “Well, why not?” She wasn’t a woman who was afraid, not at all. She probably didn’t even think about what the effects could have been.

Q: How so? You went alone

A: To be honest, there were many, many people during the civil rights movement. In fact, there were nearly 150 volunteers in my community who had their children tested; Parents who had 6 year old children who volunteered to attend these schools. But, you know, the opposition got these kids tested. What the parents didn’t know is that the test was set up to eliminate children. The same tactic we used when we wanted to register to vote. As blacks, we knew that if you really want something to change, you have to step on your plate to make it happen. And many, many people have done that.

Q: How many children passed?

A: Only six children passed. And I was one of them. When it was time to leave, these six children were split up and assigned to two schools. Three to each. When the first day came, the two decided to go to school with me, their parents not to. And I had to go alone.

Q: It’s the picture of you walking down the school steps with the US Marshalls, and you carry a briefcase about your size that makes me tear apart every time I see it.

A: Yes, I was sent out with a small lunch box and this briefcase and just said, “You should behave better.” 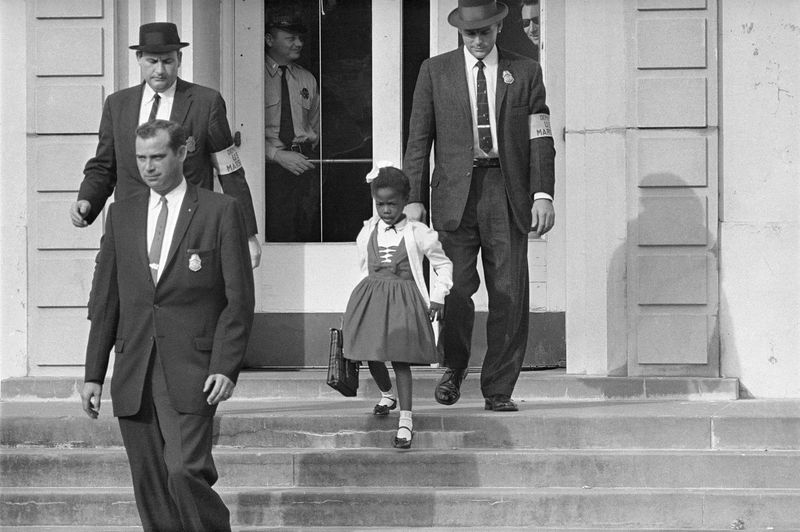 Q: Did your mom tell you that?

A: That was it. That was my preparation for what was to come. You know, but when you think about it, there really is no way you can prepare a 6 year old. If you tried, you’d probably scare them.

Q: But there is also a picture of you and your teacher, Ms. Henry, who was white, and a group of little girls who were also white and who sat together smiling at the end of their freshman year.

A: Mrs. Henry kept going to the headmaster and saying, “You know, you are breaking the law. The law has now changed and kids are supposed to be together, but you’re hiding those kids from Ruby. And if you don’t let them get together, I’ll report you to the superintendent. “And that forced them to allow us to get together. And that’s exactly what this book says.

Q: You said that the tape that George Floyd was killed on was a real catalyst for you when you wrote this book.

A: I saw what everyone else was doing and was so upset about it. It seemed like nothing was really changing. I am talking about the fact that I would always see hope that most people did not see in the eyes and hearts of young people I have worked with in schools across the country for the past 25 years. But here it happened. My babies they name must have said, “Well, Ruby didn’t talk to us about that.” You must be confused. For the first week or two we all sat and waited for someone to show up and say something. People I am very close to said, “Why don’t you write a letter?” At first we thought I’d write the letter and get it published in USA Today or the New York Times or something. But after some very careful discussions with my publisher, we decided to publish it. That’s what this book is about. I only spoke from my heart.

Q: But what is the message you have for young people who go to different schools, have different groups of friends, but still have trouble dealing with what they saw on this tape?

A: We all know that racism was kept alive through the action of young people. I always say that racism is an adult disease. We keep it from one generation to the next. That’s why I work with young people. But the truth is, I also want young people to understand that they have responsibilities too. They too must lift the torch and come together and work together to overcome our racial differences. If I could do what I did when I was six, they can do something too.

Q: There is always the cynic out there who is very woken up, those who are part of the abandonment culture and may say that this is not realistic or just plain simple. What do you say to these people

A: I am very hopeful. I believe in the Lord. I believe there are more good people in the world than bad. I mean, what can we believe in if we don’t believe in hope and love for one another?

“This is your time”

Evaluation: Streep invitations us on a lovely, meandering journey

What it is wish to work at an airport proper now

State-By-State Information to Getting Vaccinated for COVID-19

What’s good on TV; a information for Black viewers – Feb…

Home Looking within the Dominican Republic: A Tropical…